Our new 3DMark Storage Benchmark DLC extends 3DMark with a dedicated test for measuring the gaming performance of SSDs, hybrid drives, and other storage devices.

In this update, we’ve made several improvements to the Storage Benchmark result screen based on feedback we’ve received from our users.

Now that we have many thousands of results, we can show you how your benchmark score compares with results from other devices. This helps you answer the question, “How good is my storage device?” by giving some context to your score.

You’ll see a chart on the Storage Benchmark result screen that shows the distribution of scores from all other storage devices. See how your score compares with the average and best scores from other 3DMark users to see if it is worth upgrading your SSD. 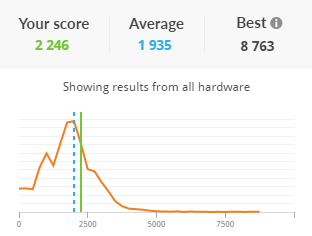 With some devices, performance depends on the firmware. To help you make fair comparisons, the result screen now shows the firmware version below the device’s model name. 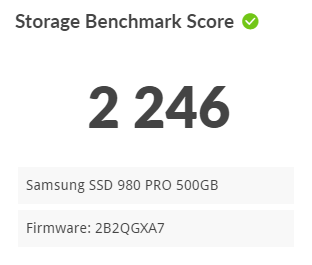 The 3DMark Storage Benchmark measures the gaming performance of your SSD with tests based on loading, saving, installing, and recording a selection of popular games. Each test uses storage operations recorded from popular, modern games to give you accurate, real-world results.

The Storage Benchmark now gives you a more detailed breakdown of your results. The updated result screen shows the average bandwidth and average access time for each test in the benchmark so you can better understand how your SSD performs with different gaming tasks.

This update adds support for using 3DMark in Portuguese (Brazil) and Polish. You can change the language setting on the Options screen.

3DMark is now available in 10 languages!

The 3DMark Storage Benchmark is available as a free update for 3DMark Professional Edition customers with a valid annual license.